It was noted, that the COGEM-classification lists with non-pathogenic bacteria and fungi contain organisms that are known to cause postharvest diseases. It raised the question whether or not these particular organisms should be considered pathogenic, and belong to a higher pathogenicity class. 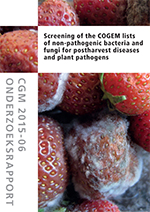