No rose without thorns

The current legislation on genetically modified (GM) crops in the European Union (EU) is insufficiently future-proof in the light of the advances being made in genetic modification technologies. The emergence of new plant breeding techniques (NPBTs) is blurring the boundaries between genetic modification and conventional plant breeding and it is becoming increasingly difficult to determine whether or not a product has been obtained by means of genetic modification. The impasse regarding the legal status of NPBTs raises questions about the appropriateness of the regulatory principle underlying EU legislation on genetically modified organisms (GMOs), which is based on the process of genetic modification and not on the products of this process.
In the EU, solutions are being sought for the problems of the current GMO legislation. Some stakeholders advocate changing the European process-based regulatory system into a product-based system. To stimulate and inform discussion on this topic, this policy report reviews the possible consequences of switching from the EU’s process-based regulation of GM crops to a product-based regulatory system. The survey of possible consequences underlying this report indicates that the process-based and product-based approaches to regulating GMOs are not simply interchangeable. Both approaches have their advantages, problems and disadvantages. It is also true that the practical differences between the two approaches are in some respects smaller than many people would at first think, for example with respect to the number and type of regulated crops. 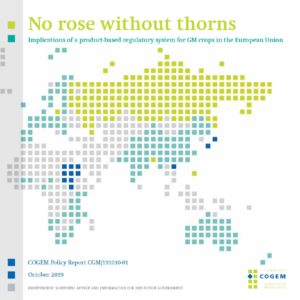